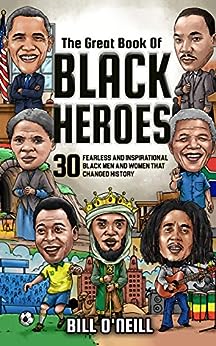 The world is full of many great black men and women who changed the course of history. Because of their contributions, they are rightfully considered heroes by not just black people around the world, but people of all backgrounds.

In The Great Book of Black Heroes: 30 Fearless and Inspirational Black Men and Women that Changed History, you’ll learn about thirty of the greatest black heroes and heroines from three different continents over a span of more than 2,500 years of history.

This book is unique because it focuses on the personal struggles and triumphs that made each individual a hero to countless people across the globe. The definition of hero in this book is any person who influenced a great number of people and often continues to long after his or her death. Heroes can be politicians, activists, philosophers, warriors, artists, or musicians, but most of all they are inspiring!

In The Great Book of Black Heroes, you’ll learn the answers to the following questions:

And so much more!

This book is filled with a plethora of facts about some of the most fascinating and impactful black men and women in world history. But keep in mind that this is so much more than a boring history book—it’s meant to keep you engaged and entertained as much as it will educate you. With that said, this book is guaranteed to edify and entertain you!

Whether you have a passing interest in history, are distantly related to one of the heroes or heroines, or just want something fascinating to read, you can’t go wrong with The Great Book of Black Heroes.