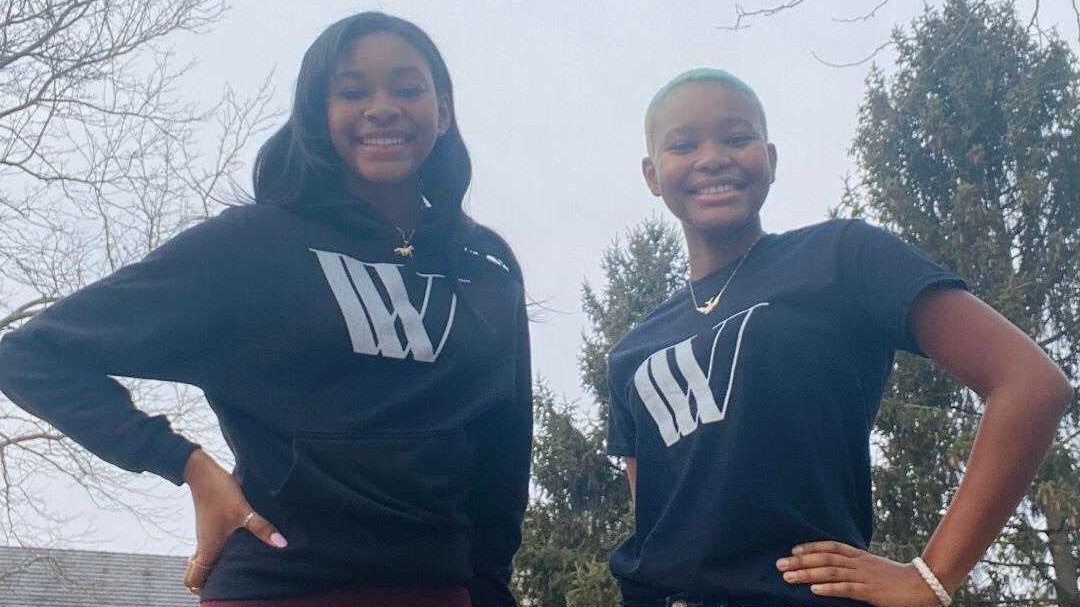 Zoe and Jordan Sims Rhodes, two sisters in Indianapolis, have created a clothing line and a hashtag to help people become more comfortable with COVID-19
vaccination, particularly focusing on communities where there is a high level of anxiety about the vaccine. The hashtag, Vaccinated While, encourages social media users to share their stories about being vaccinated, aiming to ease the worries of those who may have concerns. The same two words are also featured on their clothing line.

“Our campaign aims to overcome fear and mistrust with data and experiences in hopes of more willing vaccinations,” the sisters state on their website. “So whether you are Vaccinated While Black, Latinx, American, Queer, Dog/Cat loving, or even Boomers, we hope that you will share your collective experiences with #vaccinatedwhile.”

In conversations with their mom, who works as a scientist, the teens realized that there are many people who aren’t sure about taking vaccines. The girls then went to social media and encouraged those who are vaccinated to share their stories, using #VaccinatedWhile.

“Instead of having to rely on the information relayed through science articles or news reports, someone could listen to how their neighbor felt after being vaccinated or what it was like for someone they’re connected to on Twitter or Instagram to have gotten the shot,” Zoe and Jordan told Blavity.

The two high school students said people can be more comfortable to take the vaccine when they see others who look like them sharing their experiences.

“You see people who look like you, people who live close to you or around you get the vaccine and spread the story about what happens after you got it,” Zoe told FOX59.

Looking at some common factors leading to mistrust of the vaccine, particularly among Black people, the sisters said the community has been historically mistreated by the medical field.

“We look at examples of the Tuskegee trials and Henrietta Lacks, a Black woman whose cells, known as HeLa cells, were taken without her permission or knowledge and are still used in experiments around the world,” the young advocates said. “We see the ways the community has been misled and mistreated today, and that creates mistrust, which allows us to forget the statistics that state that we are disproportionately affected by COVID-19.”

The girls also point to a lack of accessible information as another issue.

“Not many people know someone who has received the vaccine or what happened to them afterwards,” they said.

Looking at the feedback they received so far, the sisters said many of the people who have taken part in the Vaccinated While campaign were inspired by the movement.

“Everyone who buys a shirt before they have been vaccinated is pledging to spread their story when they do get the vaccine,”  Zoe and Jordan said. “Simply wearing our merch increases awareness to those who are skeptical of the vaccine.”

The girls said they’re fortunate they were raised in a house where science took precedence.

“From the beginning of the pandemic, we were privileged to know and understand lots of the science behind how COVID-19 interacts with a person and later the efficacy of the vaccines,” they said. “This means that the same uncertainties that many people had, we did not experience. We always saw the development of the vaccine as a safe way to return to normal life.”

While Jordan plans to continue in the field of science, pursuing a career in medicine, Zoe wants to study classical literature.

“Our mother is an inspiration to us both and she pushes us to pursue whatever we find importance and happiness in,” the sisters said. “Regardless of what we end up studying and doing for a living, our mother has given us a sense of how important knowledge and education are, and she’s helped us know the importance of hard work and pursuing whatever we’re most passionate about learning and exploring.”

Dr. Mike Fletcher, chief medical officer of Hancock Health, said the sisters are among the many people who have stepped up during the pandemic to help the community. Fletcher applauds the teens for encouraging people to take the vaccine and for striving to assure their community that the medicine is safe, FOX59 reported.

“Even though this was done very fast, all the proper steps were still followed,” Fletcher said about the vaccine. “The FDA actually pulled out and looked at a prior study, and they found out that for any vaccine that had long term side effects normally they’d found evidence of that within the first two months. We’re now seven months out from the initial studies done, plus the huge numbers we have today, I think that should be very, very reassuring.”

With the launch of their campaign, Zoe and Jordan believe that they can help people return to their normal lives sooner.

“Getting the vaccination allows people to go back to in-person school and have those connections in person,” the sisters said.

“The first thing you might want to say to my African American brothers and sisters is that the vaccine that you’re going to be taking was developed by an African American woman,” Fauci said. “And that is just a fact.”

Fauci was referring to Dr. Kizzmekia Corbett, who is the National Institute of Health’s lead scientist for coronavirus vaccine research. Corbett worked with the biotechnology company, Moderna, to develop one of the two mRNA vaccines.

“The very vaccine that’s one of the two that has absolutely exquisite levels — 94 to 95 percent efficacy against clinical disease and almost 100 percent efficacy against serious disease that are shown to be clearly safe — that vaccine was actually developed in my institute’s vaccine research center by a team of scientists led by Dr. Barney Graham and his close colleague, Dr. Kizzmekia Corbett, or Kizzy Corbett,” Fauci said.

A study by the COVID Collaborative concluded that only 14 percent of Black Americans trust the safety of the vaccine. As part of their effort to eradicate the mistrust, Zoe and Jordan coincided their campaign with Black History Month.