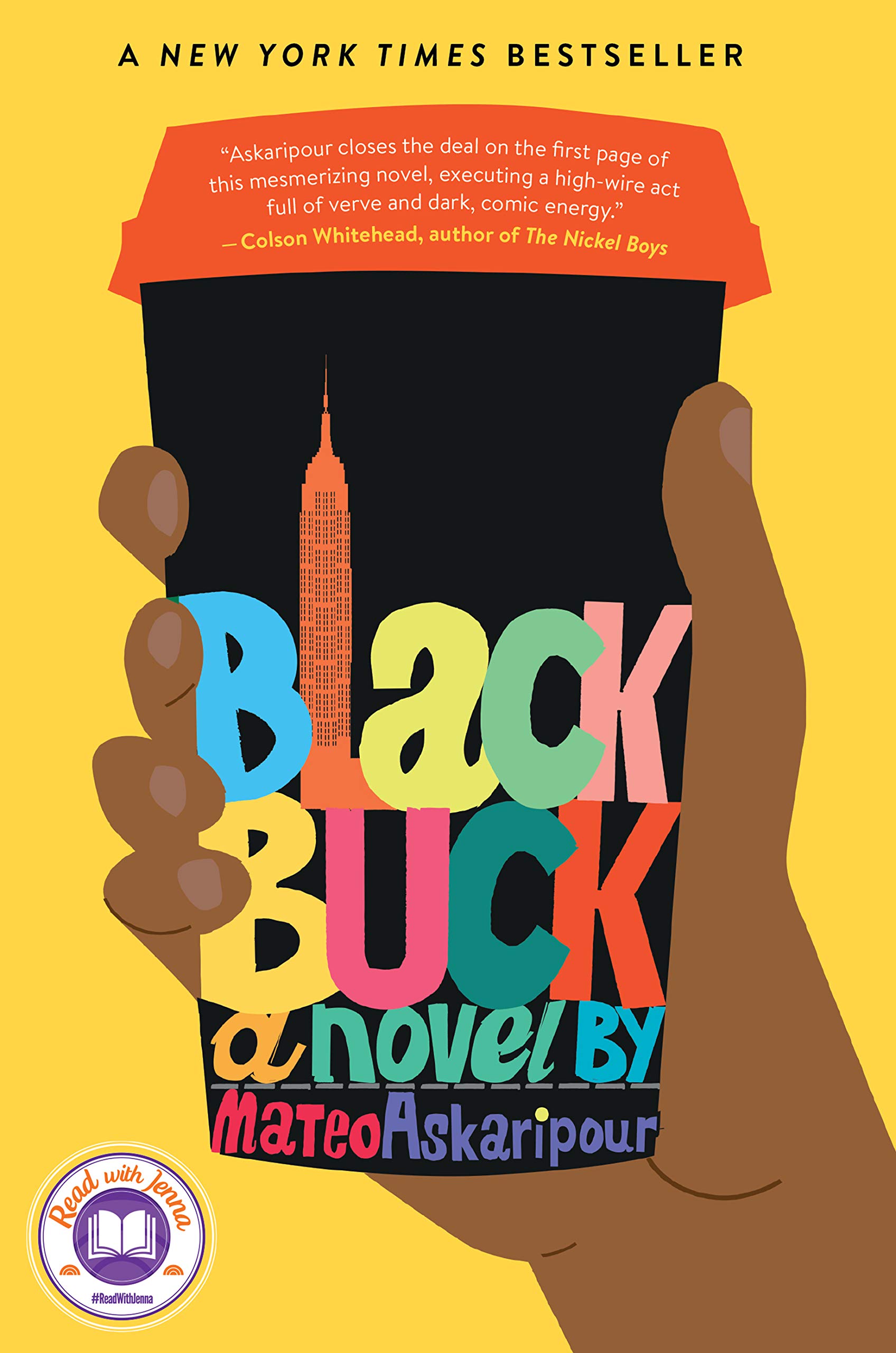 “Askaripour closes the deal on the first page of this mesmerizing novel, executing a high wire act full of verve and dark, comic energy.”
—Colson Whitehead, author of The Nickel Boys

“A hilarious, gleaming satire as radiant as its author. Askaripour has announced himself as a major talent of the school of Ralph Ellison, Paul Beatty, Fran Ross, and Ishmael Reed. Full of quick pacing, frenetic energy, absurd—yet spot on—twists and turns, and some of the funniest similes I’ve ever read, this novel is both balm and bomb.”
—Nafissa Thompson-Spires, author of Heads of the Colored People

For fans of Sorry to Bother You and The Wolf of Wall Street—a crackling, satirical debut novel about a young man given a shot at stardom as the lone Black salesman at a mysterious, cult-like, and wildly successful startup where nothing is as it seems.

There’s nothing like a Black salesman on a mission.

An unambitious twenty-two-year-old, Darren lives in a Bed-Stuy brownstone with his mother, who wants nothing more than to see him live up to his potential as the valedictorian of Bronx Science. But Darren is content working at Starbucks in the lobby of a Midtown office building, hanging out with his girlfriend, Soraya, and eating his mother’s home-cooked meals. All that changes when a chance encounter with Rhett Daniels, the silver-tongued CEO of Sumwun, NYC’s hottest tech startup, results in an exclusive invitation for Darren to join an elite sales team on the thirty-sixth floor.

After enduring a “hell week” of training, Darren, the only Black person in the company, reimagines himself as “Buck,” a ruthless salesman unrecognizable to his friends and family. But when things turn tragic at home and Buck feels he’s hit rock bottom, he begins to hatch a plan to help young people of color infiltrate America’s sales force, setting off a chain of events that forever changes the game.

Black Buck is a hilarious, razor-sharp skewering of America’s workforce; it is a propulsive, crackling debut that explores ambition and race, and makes way for a necessary new vision of the American dream.

Where did the inspiration for Black Buck come from?

Black Buck was born out of a handful of intersecting forces: desperation, obligation, frustration, hesitation, and flotation. Not really that last one, but I just wanted to keep the rhyme going. By November 2018––2.5 years after I began my journey as a writer in earnest––I had already written two books that went nowhere.

Feeling more down and out than Bernie Madoff once the jig was up, I was as close to creative rock bottom as I’d ever been. It was then I read Stephen King’s On Writing.His simple instruction of writing and reading more—and his explanation that all he does with his books is get characters into scenarios only to figure out how to get them out—clicked, and it was then I realized I had been avoiding writing about themes closest to my life: race, sales, and startups.

As I probed my reluctance to write about these topics, I also realized that I felt a sense of obligation to help Black and other people of color in ways I didn’t when, at the age of 24, I managed 30 people at a tech startup. I hired many people of color, but I should have made it a focus. So I set out to write a book that was an engaging narrative, but could also double as a sales manual to help people get ahead.

Did you set out to write it as a satire?

The straight up answer is no. In fact, before people started telling me it was satirical, I treated it as an earnest piece of work. I’ve discovered that it’s both earnest and satirical—and I’ve had to learn how to hold both truths.

The year I began writing it, 2018, was the year I read the most: 60 books. From reading a variety of books, and learning, from others, about the tradition I was writing in, I came to understand that I am part of something stretching decades into the past––Black writers writing about being the only one in white-majority spaces, and all of the hijinks (bullsh**, really) that goes down. When I read John A. Williams’s The Angry Ones, I felt like I had a big brother who was saying, “Keep it up. This sh** has been happening forever, and America needs to get the sh** slapped out of it again as a reminder.”

With that said, I’m proud to call the book an earnest work of satire. It’s when people start labeling the book as “absurdist” that I start to feel strange. I’m no data scientist, but I do like patterns, and I’m beginning to see that the further removed from the Black American experience someone is, the more they perceive this book to be full of absurdity. A handful of events, scenes, and people definitely are, but I challenge people to reconsider what is absurd, especially if it’s far outside the scope of their own realities. When Sammy Davis Jr. joined the army, at age 18, other soldiers peed in his beer and all over him, painted him white, and beat the hell out of him multiple times––what happens to Darren in Black Buck is a cakewalk compared to that absurd sh**.

Why did you decide to take on the world of sales?

As startup folks would say, it was “ripe for disruption.” If I ask you to think of a salesperson, you will most likely think of a salesman. And if I ask you to think of a salesman, you’ll most likely think of a white salesman, which is a problem. It is also a problem if you just think of Will Smith in the Pursuit of Happyness or Lakeith Stanfield in Sorry to Bother You, because, in my opinion, they were more of men who did a form of sales rather than being salesmen in the same way Jordan Belfort, the guys from Boiler Room, Glengarry Glen Ross, or Willy Loman in Death of a Salesman was––people who lived and breathed sales 24/7.

Sales is as American as slavery, and America is long overdue for a new salesman. I’m fortunate to have had a sales background, and I’m fortunate to be a Black man. It was the perfect fusion to help me attempt to reconfigure what people think of when they think of salespeople.

In Black Buck, you see LGBTQ salespeople, you see saleswomen, you see salespeople from a variety of different backgrounds––in some cases I am reflecting the reality I’ve experienced, and in others I’m creating a new world of sales where there’s more…wait for the buzzword . . . diversity. But diversity with fangs, you know what I’m saying? Diversity that owns its own destiny instead of pleading, hat in hand, for a handout from white people lest po’ Black and Brown folk remain stagnant. Nah, that’s not my type of diversity. I’m on some Malcolm X, Muhammad Ali, Nina Simone sh**––light on my feet and all smiles until I connect with that sweet spot on your chin that rocks your perception of opportunity and race in America to the core.

That’s intense. What do you hope to achieve with this book?

I want people, especially those who have ever been made to feel less than, to know that they, too, deserve to thrive and chase their dreams. We won’t all achieve them, but we have as much right as anyone else to work toward them. I was lucky to work at a startup where I could rise, earn a lot of money, travel after I quit, and then sleep on my parents’ couch for a year as I figured out how to write. I’m not one of these “jest pull yerself up by yer bootstraps, slacka,” people. Not everyone has the mental or emotional space to chase their dreams, but they can work toward that, and that’s the main message of this book: wherever and whoever you are, you can begin on the path to freedom, even in the smallest way. The thing is to not let the thought of failure prevent you from taking the first step.

Finally, Black Buck is a cautionary tale, somewhat in the same way that Get Out is. If Black people enter unfamiliar scenarios and don’t pay close attention to the intentions—especially if malicious—of those around them, they’re more likely to find themselves in “the sunken place,” or, as my brothers and I like to say, they’ll eventually “get got.” If you don’t know what it means to “get got,” it’s okay, Urban Dictionary is your friend.