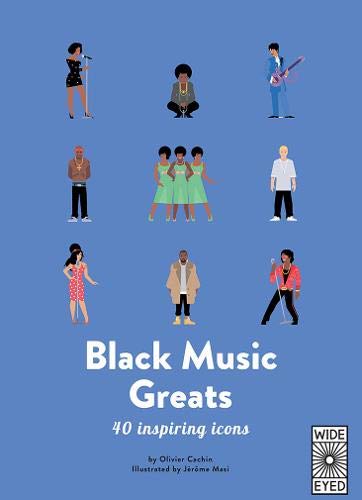 The biggest names…the coolest sounds…the 40 most inspirational movers, shakers, and innovators in black music are here! In this fun, fact-packed book from the 40 Inspiring Icons series, learn how these black musicians changed music, from the creation of blues to the invention of rap.

Meet the Godfather of Funk, the High Priestess of Soul, and the King of Reggae. Learn how Marvin Gaye shaped the sound of Motown, how N.W.A. redefined rap, and what made the Supremes, supreme. From Robert Johnson, who recorded one of the first examples of the blues in 1936, to rap superstar Drake, whose 2012 album Views spent 13 weeks at number one on the US Billboard 200, these are the 40 black artists to be listened to and learned about by all:

Each spread presents a single musician or band, highlighting key facts about their background, most popular songs, most iconic shows, genre-defining techniques, friends, rivals, and nicknames, along with a fun, illustrated depiction of them that calls out elements of their signature style.

With so many icons to choose from, which will you add to your playlist?

Each book in the 40 Inspiring Icons series introduces readers to a fascinating non-fiction subject through its 40 most famous people or groups. Explore these other great topics through their most interesting icons: People of Peace, Super Scientists, Soccer Stars, Fantastic Footballers, Music Legends, and Greek Gods and Heroes.

Born Eunice Kathleen Waymon, she would eventually change her name to Nina Simone to stop her family members realizing she was a musician. She grew up in a poor family in North Carolina. She learned to play the piano at the age of three but wasn’t allowed into music school because of her black skin. Simone then dedicated her career to anti-racist music. From classical to blues, Simone’s enchanting voice has influenced many artists, including Elton John, who has named one of his pianos after her.

Her choice of stage name blended her childhood nickname ‘Nina’ from niña, which means ‘girl’ in Spanish, with the first name of Simone Signoret, who was her favorite French actress.

Simone’s 1958 song ‘I Loves You, Porgy’ was a huge hit. Unfortunately she sold the rights for three thousand dollars and the record company made a new name millions of dollars.

1992 Publishes her autobiography, I Put a Spell on You, written while in Amsterdam.

Prince: The Purple Priest of Pop

Born in the same year as Madonna and scandal Michael Jackson, Prince Rogers Nelson signed his first record deal at the age of 19. Prince was a virtuoso and played all the instrumental parts on his first album For You. On later albums he enlisted a band called The Revolution. Prince’s 1984 hit-filled album, Purple Rain, catapulted him to fame and he played the lead role in the film of the same name. Prince traveled the world on tour, giving performances that lasted up to three hours! He died after accidentally taking too many pain killers.

Prince loved to sign his many and diverse projects using different names. He has been credited with the names Christopher, Camille, Jamie Starr, The Artist, and even, The Artist Formerly Known as Prince.

Prince founded the record label Paisley Park in 1985. His recording studio has the same name. At his recording studio there is a locked vault filled with music that Prince made before he died but that no one has ever heard before.

1989 Changes his name to an unpronouncable symbol

Run-DMC: Hardcore Rappers of the 1980s

Founded in the New York suburb of Queens, the trio Run-DMC was made up of two rappers (Joseph Simmons, aka Run, and Darryl McDaniels, aka DMC) and one DJ (Jason Mizell, aka Jam Master Jay). Their sharp style, and angry rap backed by drum machines and screaming guitars, marked the end of the old-school style. In 1985, they were the only rap group to perform at the charity concert Live Aid. The fatal shooting of Jay in 2002 sadly spelled the end for Run-DMC.

Following their first album, Run-DMC pushed fierce guitar riffs by Eddie Martinez up against rap beats. In the video for ‘King of Rock’, Run and DMC impersonate and mock the Beatles.

With 15 million albums sold, Run-DMC were among the first to make hip-hop successful on a big scale. They were also the first hip-hop group to appear on the cover of the magazine Rolling Stone.