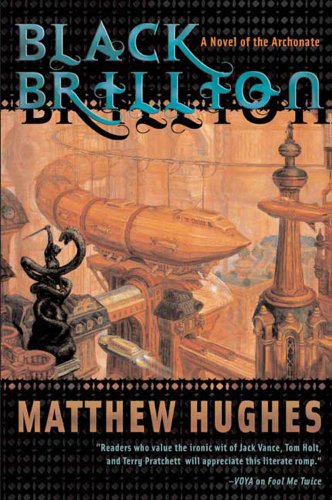 "Hughes serves up equal measures of wit, intrigue, and seat-of-the-pants action and even dabbles a little in Jungian psychology…Irresistibly good reading."–Booklist

Boro Harkless has devoted his life to the service of the Archonite Bureau of Security, the force tasked with keeping the peace among and within the city-states of Old Earth. An idealist driven by the memory of his heroic father, he comes to the city of Sherit, seeking the notorious Luff Imbry.

Luff Imbry has devoted his life to the enjoyment of wealth. A gourmet, a charmer, and an ever-so-stylish fop, he has come to the city of Sherit to pursue a new fortune. Not, mind you, his own, for Luff is also a mountebank, swindler, and forger of the first water.

Tossed together by circumstance, they form an uneasy truce when they discover a common goal: capturing the grandest con-man of them all, Horselan Gebbling. Gebbling, who made off with Imbry's previous fortune, is posing as Father Olwyn, Sacerdotal Eminence of the Assembly of Tangible Unity, and has chosen as his prey the victims of the first new disease in millennia, the invariably fatal ailment known as the lassitude.

Dangled in front of the victims is the fabled relic of past glories, the gemstone called black brillion. About black brillion, learned men agree on only two things: it can do anything, and it doesn't exist. But Gebbling boasts of having it, and its effects on the lassitude are nothing short of magical.

Riding a landship across the unnatural prairie known as the Swept, Boro and Luff get caught up in an ever-growing tangle of mysteries. Nonsense chants lead to miracle cures. Guests end up crushed beneath the ship's giant wheels. The crew have secrets of their own.

The dangers are not merely physical. On the ship is a noönaut, an explorer of the Commons, the dream realm which contains the memories and emotions of hundreds of thousands of years of human existence. Something in the Commons is calling to Boro to claim him for its own.

What lurks beneath the Swept? What hides within the Commons, eager to come out? And exactly what game is Gebbing playing?

Filled with dollops of drollery and an ancient evil, Black Brillion is a science fantasy caper that grows into a metaphysical exploration of the human psyche. Matt Hughes has crossed Jack Vance with Carl Jung to come up with a bold new novel of life on an Earth grown older by millions of years.

This is the third novel in the Archonate series, following Fools Errant and Fool Me Twice.

At the Publisher's request, this title is being sold without Digital Rights Management Software (DRM) applied.