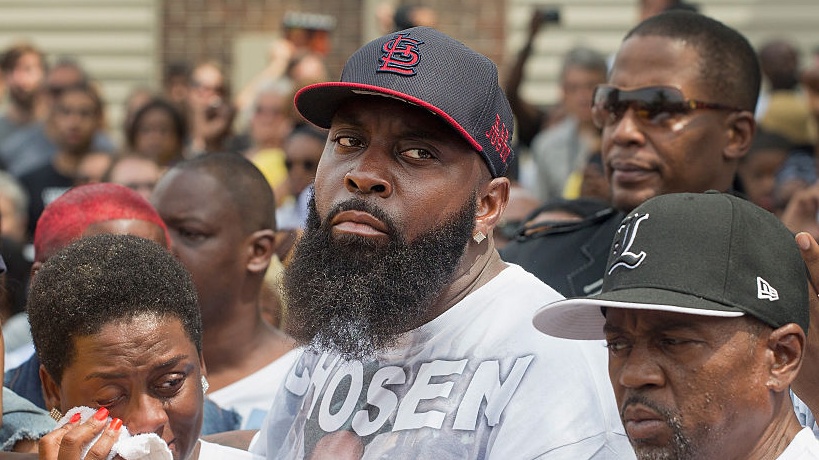 In the summer of 2014, Michael Jr. was gunned down by police officer Darren Wilson, per CNN. The 18-year-old’s death sparked protests nationwide and thrust the city of Ferguson into the epicenter of Black social justice. Although the teen’s family has fought tirelessly to get the case reopened, St. Louis County prosecutor Wesley Bell announced last summer that he would not charge Wilson for the death of Michael Jr., as Blavity previously reported.

In an accompanying press release on Tuesday, Russell alleged that the organization has yet to send any money to help the Brown family foundation. The IBFA tweeted this week that Michael Sr. has received only $500 from a Black Lives Matter affiliated group despite the organization holding annual tributes and celebrations in his son’s honor.

Even before the article that @aaronlmorrison came out #Ferguson Mike Brown Sr. and many Black community members have had questions about the money #BlackLivesMatter was raising. Here is their statement pic.twitter.com/ykpGZ5Z4KJ

The Ferguson activists’ allegations come on the heels of the release of the Black Lives Matter Movement’s annual impact report. CNN reports that the foundation raked in a historic $90 million in donations over the last year.

“This has been a record-breaking year for fundraising, which has been matched with just as historic an amount in campaign budgets and grant disbursements,” the foundation wrote.

The foundation has reported strong numbers in terms of distributing resources to local chapters and grassroots endeavors. It revealed that it had given nearly a quarter of its total fundraising efforts to local chapters and organizations across the country, nearly three times the industry standard, CNN reports.

Despite its efforts, organizers from Ferguson are questioning why they are being left out.

“How could you leave the families who are helping the community without any funding?” Michael Sr. asked in the press release.

“What type of movement are we building when we are saying Black lives matter but the freedom fighters and the families are being left behind? Where is our restitution?” Russell said.