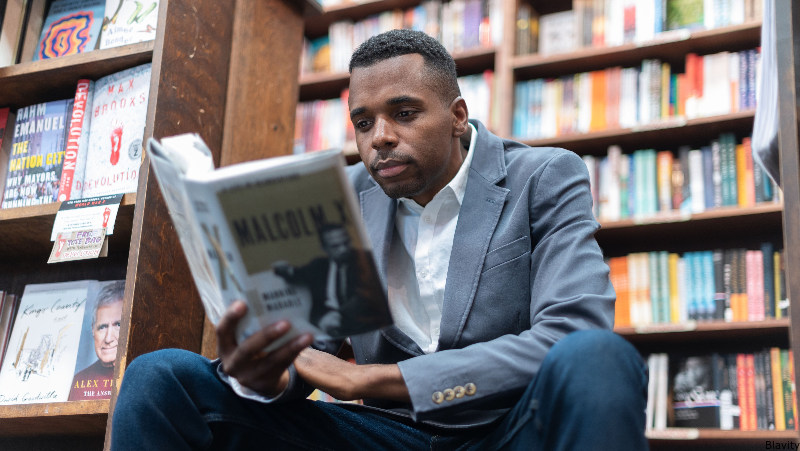 Podcaster Jermaine Fowler transports his listeners to the Antebellum South — where the pounding of hooves and taunting barks of hounds propel enslaved escapees further from the slave catchers that hunt them.

But it isn’t the terror of escape for fugitive captives that Fowler explores. Instead, he educates his audience on the practicalities surrounding running away. The self-described “historical storyteller” has made it his life’s work to highlight the humanity, too often buried beneath hunger and strife, in all of his subjects.

“I named the podcast The Humanity Archive because I believe personally in the idea of human brotherhood, of sisterhood — of personhood,” Fowler told Blavity. “I always try to center that humanity in my stories as a baseline, as a way people can connect to one another through history. When it boils down to it, we all live and we all die. It’s what we do in the in-between time, those are the studies I tell: what people stood for, what they stood against.”

In his studies of these freedom-bound captives, and his efforts to humanize them, Fowler tells the story of Dangerfield Newby, the freed son of a slave owner and one of his hostages, and a fighter in abolitionist John Brown’s historic raids.

In conversation with Blavity, Fowler highlighted the heartbreaking details of Newby’s life and revolutionary death. Indeed, for the podcaster, history is not simply the tale of what happened, and to whom, but how broken hearts were mended — even under the threat of death.

It is the things that enslaved people carried as they darted — feverish and determined — towards freedom, that the historian says best captured their humanity. It is the pistols and love letters, the hardened bread and forged freedom papers, that offer Fowler insights into the intimate and harsh realities of life for an escaped captive.

“When people hear Newby’s story, it humanizes him. Like, ‘Wow, this is what he was fighting for,’” he explained. “When you realize that enslaved people may have taken a gun with them on the run, you remember that these are normal people. People that had to eat, people that were trying to get their kids free. When you bring history to that human level, it allows people to connect with it more.”

Ultimately, he hopes, this deeply human focus will inspire his listeners to reject the othering narratives of dehumanization that often surround the history and define the present moment.

The Louisville, Kentucky resident is a student of resistance movements and cites the enduring Black freedom struggle as his primary focus. Thinkers like W.E.B. Dubois, Ella Baker, Fannie Lou Hamer and Anna Cooper come to mind as he considers those most impactful on his own development.

In his mission to make history human, the lecturer focuses on the voices that have been erased from the historical canon, like suffragists Sojourner Truth and Ida B. Wells. In one episode, “Women’s Suffrage Part 1: The Seeds of Equality,” the humanity archivist explores the “half-truths” of the women’s suffrage movement.

Today, historical voters’ rights movements take on a renewed sense of relevance, as baseless claims of voter fraud cast a shadow over the 2020 election — and left the U.S. Capitol Building trampled and vandalized by America’s chanting #StopTheSteal. The claims of voter fraud, stemming from the record Black voter turnout in swing states across the nation, were undeniably racialized.

Fowler said the work Truth and Wells did for equal voting rights should be centered in the discourse on voting rights and women’s suffrage, as a means to both inform and inspire future generations like those fed the “big lie” about a stolen 2020 election.

“When you think about the exclusion and erasure of women like Ida B. Wells,  Sojourner Truth and Anna Cooper, people could look back and almost think Black women weren’t part of the suffrage movement, that there were just white saviors who came in and saved all women,” Fowler told Blavity. “But then you look more closely at the history, and that second look allows future generations of Black women to see that they have always been agents in their own freedom.”

But women’s suffrage isn’t the only feminist movement that Fowler dives into the darkened, sprawling sea of history chasing. His podcast also makes a note of mentioning that the famous 1848 Seneca Falls Convention, heralded as the first political effort organized in pursuit of both women’s rights and abolition, was not, in fact, the first of its kind. It was predated by the 1837 Anti Slavery Convention. Fowler says, if this event had taken its rightful, centered place in historical discourse, it may not have taken until 1989 for the term “intersectionality” to be coined.

“It seems like a lot of those rare times when there was solidarity, those instances are downplayed,” he said. “We need to talk about the division: Black women were overall excluded from the suffrage movement. But we also need to hear about those examples when people did come together. Maybe, had that been highlighted, we could have understood intersectionality a lot sooner.”

Black suffragists like Wells seemed to have had a keen sense of foresight into an America that, centuries later, would remain gridlocked in some of the same, recycled debates — with the issue of “unity” with white supremacists not least among them.

In her time, Wells, a co-founder of the NAACP was vocal about the dangers of uniting on the wrong side of history. Namely, Wells raised the issue in an open letter to a fellow journalist, reprinted by the New York Freeman in 1885, and published again in 2014.

“In consideration of the unjust treatment of the Negro in the South; of the outrages and discriminations to which he has been a victim, as is very well known to yourself, do you really and candidly believe your assertion that if appealed to in honesty, the white people of the south ‘Could not and would not refuse us justice?’” Wells posited. “I do not believe it, as they have been notably deaf to our calls for justice heretofore.”

It is hard not to hear echoes of Wells’ fateful cautioning to resist pandering to racists today, as Republican lawmakers insist on a demonstration of unity with those involved in the January 6 insurrection, and assert that a second impeachment of the disgraced former president Donald Trump will only deepen the division he has sewn across the nation.

Fowler put it simply, “You can’t have justice without accountability,” he told Blavity.

The history educator explained that a delicate balance must be struck between redemption and repercussion, in order to navigate contentious historical moments.

“This is a debate that goes back to the abolition of slavery,” Fowler said. “There were some abolitionists that wanted to use moral persuasion, and even back then, others were saying ‘We need to go militant. We’re not gonna be able to appeal to their conscience. They’re using the bible against us.’ There’s always been this ebb and flow within the freedom movement.”

Still, the historian of humanity said, in moments as darkened as those which he explores, some things are not to be compromised on.

“We should always try to appeal to morality. But sometimes, people have such monstrous behavior that we have to realize when that’s no longer an option. That’s what Wells spoke to with all the mentioned atrocity. Black people being lynched, people coming out by the thousands to watch. She said a rifle should be on the house mantel of every Black person, because this is how serious it was — life or death, right?”

For more lessons from the intellectual adventurer, subscribe to The Humanity Archive.