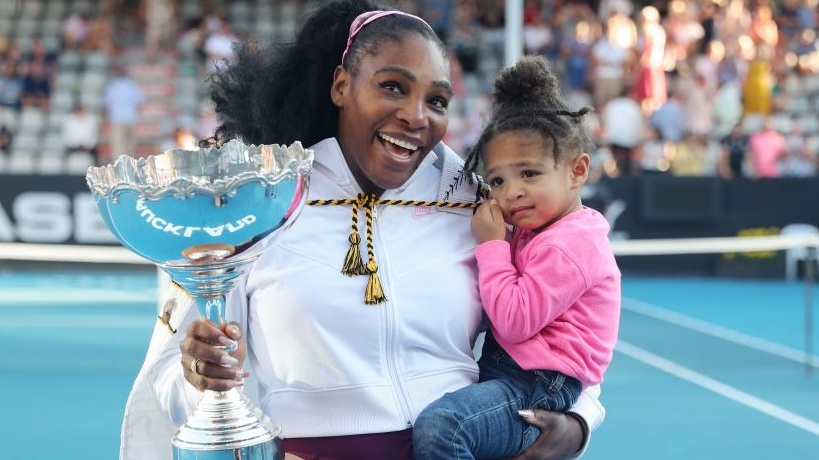 The three-year-old daughter of Serena Williams is already following in her mother’s footsteps when it comes to grace and beauty. Olympia proved her talents on March 2 when she joined the tennis superstar for their first-ever mother-daughter fashion campaign, titled “Footsteps to Follow.”

There’s adorable behind-the-scenes footage of the shoot in a video posted to the website of the iconic brand, Stuart Weitzman, which named Williams as a global spokeswoman last year, according to Elle. As the pair show off their wardrobe and their elegance in the clip, they also share a heartwarming moment, expressing their love for each other.

“I would definitely call Olympia my mini-me. She is mini Serena. She’s so cute, and she’s so fun,” the superstar athlete said in the clip.

But she also adds that Olympia doesn’t have to follow in her footsteps.

“I want her to do whatever she wants to do and what’s best for her,” Williams said, while the footage shows the two models laughing and playing together in matching black bodysuits.

I can’t get enough of Serena Williams’ new Stuart Weitzman ads with her daughter Olympia pic.twitter.com/CiNqklOCay

A symbolic message is seen in the clip when the adorable toddler tries on her mother’s shoes.

“Why would you try on my shoes?” the 39-year-old asked Olympia.

The little girl also echoes her mother’s words, painting a picture of all that she wants in life.

Olympia and Williams then vow to be together forever as the video concludes.

Williams’ husband, Alexis Ohanian, has also been known to turn heads with his wardrobe. Last month, the Reddit founder made a statement at his wife’s Australian Open match, donning a white graphic T-shirt that featured a photo of the tennis champion and a message reading, “Greatest  Athlete.”

Olympia is not only learning from her parents’ fashion skills but also taking up their entrepreneurial spirit. As Blavity previously reported, Olympia already owns a stake in the Los Angeles franchise of the National Women’s Soccer League. The league made the announcement last year, making Williams and Olympia part of a large group of investors in the Angel City franchise that will play for Los Angeles beginning in spring 2022.

Ohanian, who is a lead founding investor in the franchise, said he is excited to bring women’s soccer to the city and wanted the team to be a part of his daughter’s future.