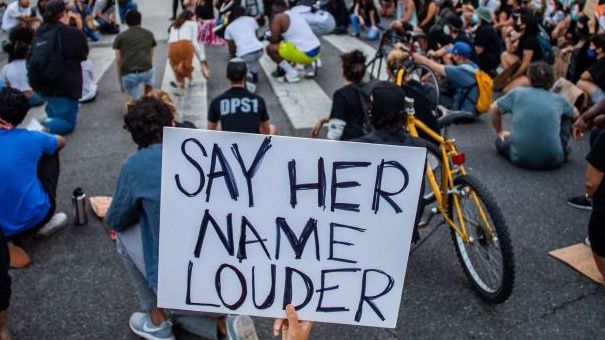 Symone, a beloved contestant on RuPaul’s Drag Race, put a spotlight on police brutality with powerful words etched onto a runway costume.

On the show’s latest episode, Symone said she was hoping to remind people of the lives lost due to police violence by sketching “Say Their Names” on the back of her hat and stitching in two bullet holes into the back of her dress.

“I really wanted to take this opportunity to do some activism in my drag and personify that Black angelic being. As I turn around, you see on the back there are two bullet holes and I put my hands up. ‘Don’t shoot,'” she said about the dress, which was designed by Marko Monroe.

“It is not a moment, it is a movement. We continue to say their names. Breonna Taylor, George Floyd, Brayla Stone, Trayvon Martin, Tony McDade, Nina Pope, Monica Diamond,” she added.

Symone, who is considered a frontrunner on the show, which is now in its 13th season, spoke to EW about her outfit, explaining that she did not want people to forget about the lives lost to police violence.

“I thought that, especially with the times we were in, whenever this airs, I don’t want people to forget, and I want to make a statement. I wanted to do it in a way that was still in-your-face, but artistically,” she said.

“No matter how pretty or beautiful or non-threatening I — and Black people — seem, we’re still seen as a threat. In high school, people would say, ‘You’re not like the rest of them.’ None of those things matter in some people’s eyes. I’m still Black. It’s a reality that I live in this country and this world, and some people find me to be a threat,” she added.

Symone later released a longer video that featured more looks at the dress and a deeper discussion of what it meant.

“I’m proud. Proud to be Black. I’m proud of my ability to stand with those whose lives have been taken from them, simply because they were born darker than white. This is for you. Y’all are Black, and y’all are beautiful. But above all things, you were human,” she said in the video.

The challenge for contestants this week was “Fascinating Fascinators” and Symone took it in a much more serious direction compared to her competition.

“[It shows] that Black is beautiful, but that there are so many things that are put upon us that are negative. I wanted to show that beauty that is part of my community, and I wanted people to understand that we’re people, too,” she added.

On Instagram, Symone later shared a photo comparing her dress to one designed by Nigerian British designer Mowalola Ogunlesi and worn by Naomi Campbell for Mowalola’s SS20 collection entitled “Coming for Blood.”

“This dress is extremely emotional to me – it screams my lived experience as a black person. It shows no matter how well dressed you are or well behaved, we are time after time, seen as a walking target,” Ogunlesi said.