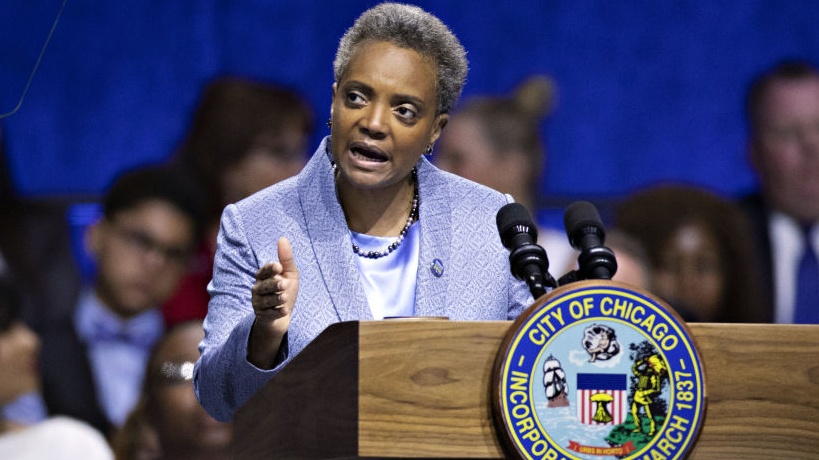 Activists are calling for Chicago
Mayor Lori Lightfoot and Police Superintendent David Brown to resign following the police shooting of a 13-year-old boy, according to CBS2 Chicago.

The demands arose following the fatal police shooting of Adam Toledo which took place on March 29. However, body camera footage of the incident was released last week by the Civilian Office of Police Accountability and was met with dismay from protesters who criticized the slow rollout of information.

Toledo was shot by an officer who has now been identified as 34-year-old Eric Stillman around 2:30 a.m. Stillman’s bodycam footage shows him chasing the teenager down an alley in Little Village, a neighborhood that is predominately Latinx, according to Enlace Chicago, and often referred to as La Villita.

Little Village Community Council President Baltazar Enriquez, who said seeing the video of Toledo’s death “broke us down to the core,” asked for Mayor Lightfoot to reallocate funds from the police department to the community.

“The police department has a $1.7 billion budget,” he said, CBS News reported. “They keep taking the money from our kids to give it over to the police department. We’re saying enough is enough. It’s a shame that these police officers, instead of protecting us, are killing us. This is how they treat Little Village because we’re Mexican and because we’re brown.”

Berto Aguayo, executive director of Increase the Peace, a volunteer-led youth organization that tackles violence through leadership, said investment in neighborhoods like Little Village is paramount, including funds for employing young people amongst other services.

“Police and gang violence, street violence, have the same common denominator: disinvestment,” Aguayo said, according to Chicago PBS. “When you look at communities like Little Village, like Back of the Yards, like Englewood, communities that have high levels of violence, they’re also the very same communities with high levels of youth unemployment, where it’s harder to find an after-school program to engage in, where it’s a lot harder to find a mental health center.”

After protests took place beginning Thursday and into the weekend, Lightfoot took to Twitter on Sunday to dispel unsubstantiated rumors saying that she allegedly had an extramarital affair and to reject statements that she would be resigning as mayor.

“Good morning from my mansion in Sauganash,” she wrote in a tweet before scrutinizing members of the media for perpetuating “trash as truth.”

“Seriously, though—our city doesn’t have any time for homophobic, racist and misogynistic rumors, today or any day,” she continued. “If people hadn’t noticed, we have major challenges in Chicago we need to address TOGETHER. This nonsense that some apparently have the luxury of indulging in has not fed one person, stopped the pandemic, housed anyone living on the street or saved one young person.”

1/ Good morning from my mansion in Sauganash.

Seriously, though—our city doesn’t have any time for homophobic, racist and misogynistic rumors, today or any day.

Ultimately, Mayor Lightfoot requested that anyone who is not willing to help her make progress to “get out of the way,” as she assured residents that she will continue to serve the people of Chicago “today, tomorrow and into the future.”

“We need people who are for our people, not against our people,” Botello said. “We need people that can empathize, can sympathize, that understand why we are the way we are and what we are going through and actually see potential in us.”