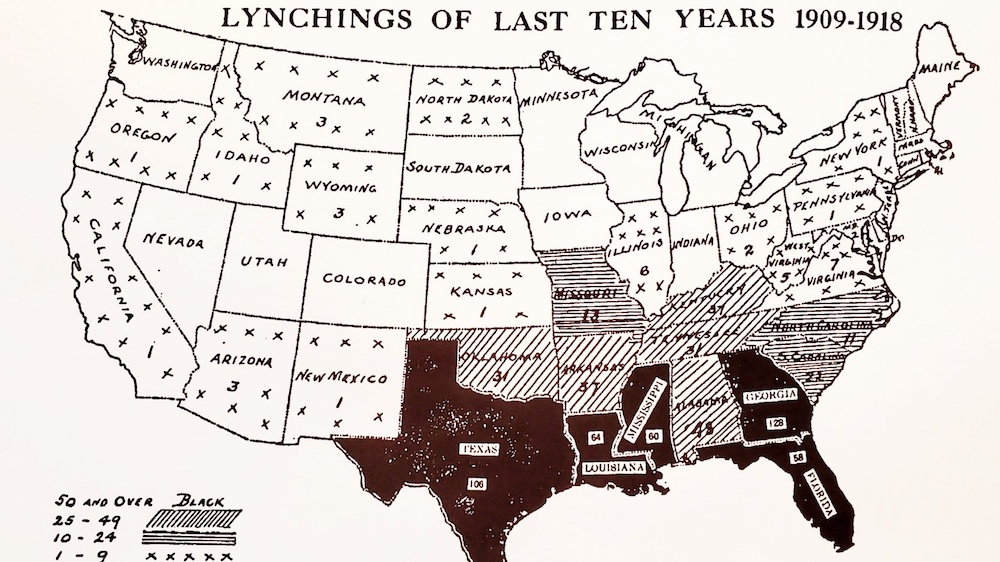 Mapping is part of the broader Black creative tradition and political struggle.

Over the centuries, African Americans developed “way-finding” aids, including a Jim Crow-era travel guide, to help them navigate a racially hostile landscape and created visual works that affirmed the value of Black life.

The Black sociologist and civil rights leader W.E.B. Du Bois produced maps for the 1900 Paris Exposition to inform international society about the gains African Americans had made in income, education and land ownership since slavery and in face of continuing racism.

Similarly, in 1946, Friendship Press cartographer and illustrator Louise Jefferson published a pictorial map celebrating the contributions of African Americans – from famous writers and athletes to unnamed Black workers – in building the United States.

One map, published in 1922 in the NAACP’s magazine “Crisis,” placed dots on a standard map to document 3,456 lynchings over 32 years. The Southeast had the largest concentration. But the “blots of shame,” as mapmaker Madeline Allison called them, spanned the country from east to west and well into the north.

These visualizations, along with the underlying data, were sent to allied organizations like the citizen-led Commission on Interracial Cooperation, to newspapers nationwide and to elected officials of all parties and regions. The activists hoped to spur Congress to pass federal anti-lynching legislation – something that remains to this day unfinished business.

Much anti-lynching cartography was inspired by the famed activist and reporter Ida B. Wells, who in the early 1880s made some of the first tabulations of the prevalence and geographic distribution of racial terror. Her work refuted prevailing white claims that lynched Black men had sexually assaulted white women.