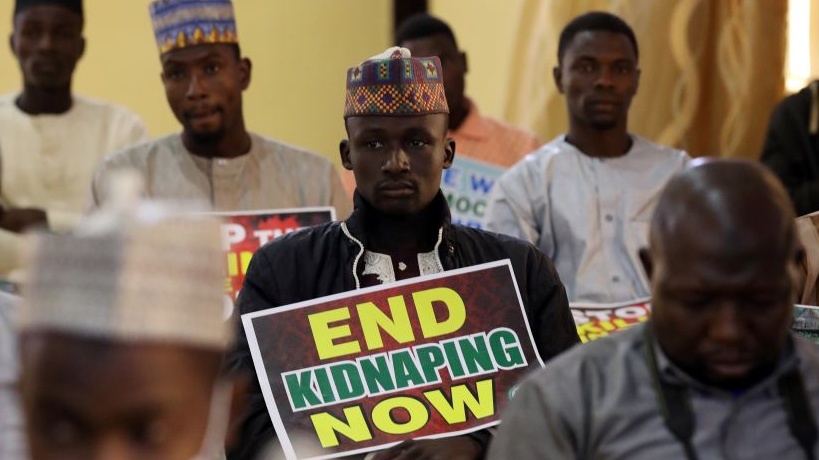 Unidentified gunmen kidnapped 317 girls in northwest Nigeria on Friday, continuing a troubling trend in the country which has been especially on the rise in the past week. The latest abduction, which comes nearly seven years after Boko Haram militants abducted 276 schoolgirls from the town of Chibok, is also the region’s second kidnapping in a little over a week.

Police in Zamfara state said they are now working with the army to find the “armed bandits” who took the 317 girls from Government Girls Science Secondary School in the town of Jangebe, Reuters reported. Sulaiman Tanau Anka, Zamfara’s information commissioner, said the perpetrators came in firing sporadically during the raid around 1 a.m.

“Information available to me said they came with vehicles and moved the students, they also moved some on foot,” Anka told Reuters.

A police officer was killed during the raid, according to CNN.

“They came on about 20 motorcycles and they marched the abducted girls into the forest,” an anonymous source told CNN. “The bandits arrived around 1:45 a.m. and they operated until about 3 a.m.”

The source also said there’s a military checkpoint that is four minutes away from the school, which holds about 500 students. While many of the 500 were taken, others were able to escape. A police spokesperson said a detailed statement will be released after investigators piece together what happened.

“My daughter is among those who were taken away,” Jummai Haruna, mother of Hafsat Abubakar, told CNN. “I believe she was taken away wearing only her sleeping clothes because I found her hijab and her school uniform. I miss her so much already. Nobody has told me anything about the whereabouts of my daughter. She has always been with me. Her father died when I was still pregnant with her. Now, I don’t know what to do.”

Safiyanu Jangebi, a resident in the region, said he heard gunshots at the time of the kidnapping and people have been clashing with police after the abduction.

“There are policemen all over the school, the youths are angry and are now throwing stones at the police. The governor’s wife was also here. They also threw stones at her, chanting ‘Allah will punish you’ and ‘We will not forgive you,'” Jangebi said.

Amnesty International has described the incident as a “war crime.” UNICEF also expressed concern about the country’s ongoing problem.

“This is a gross violation of children’s rights and a horrific experience for children to go through — one which could have long-lasting effects on their mental health and well-being,” said Peter Hawkins, UNICEF representative in Nigeria. “We utterly condemn the attack and call on those responsible to release the girls immediately and for the government to take steps to ensure their safe release and the safety of all other schoolchildren in Nigeria.”

The incident, which marks the third kidnapping in the region since December, is a continuation of the assailants’ effort to receive government payoffs in exchange for child hostages, anonymous officials told Reuters. The government, however, has been denying the payouts.

The school abductions, which were first carried out by Boko Haram and Islamic State West Africa Province in the northeast, are now being used by other militants in the northwest. Last week, perpetrators kidnapped 42 people, including 27 students, during an overnight attack on a boarding school in the north-central state of Niger. One person was killed in the attack.

In December, 344 boys who were taken from the town of Kankara in northwest Katsina state were freed six days after being abducted, as Blavity previously reported. The government said a ransom was not paid to free the boys.

Global outrage followed after 276 girls went missing from a boarding school in the northeastern Nigerian town of Chibok in 2014, as Blavity previously reported. While organizations such as The Chibok Association spearheaded the effort to help find the children, social media users also brought attention to the tragedy by using the hashtag #BringBackOurGirls.

Halima Ali Maiyanga, who was among the children kidnapped by Boko Haram, escaped earlier this month after nearly seven years of being held captive, as Blavity previously reported. The young woman spoke to her family on the phone, telling them that she was able to flee during a Nigerian military offensive against Boko Haram fighters in the country’s northeast. While others have also escaped since the 2014 abduction, dozens more are still missing.