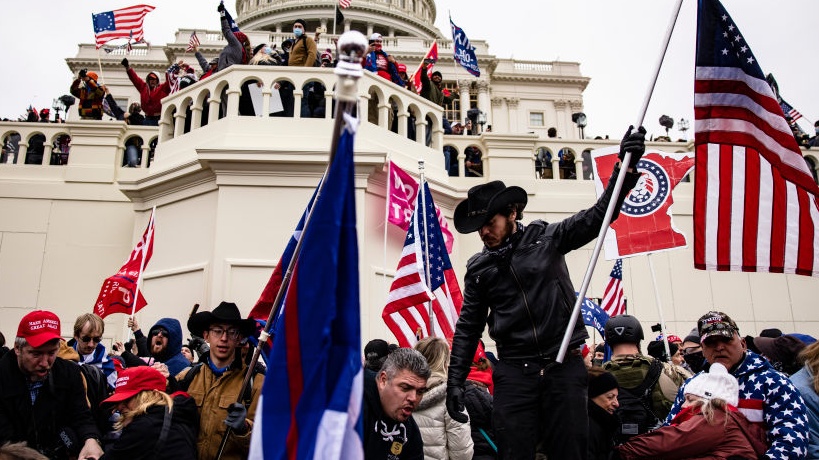 Paul Allard Hodgkins, one of the rioters who raided the Capitol on Jan. 6, was sentenced on Monday to eight months in prison.

“If I had any idea that the protest … would escalate (the way) it did … I would never have ventured farther than the sidewalk of Pennsylvania Avenue,” Hodgkins told Judge Randolph Moss, the Associated Press reported. “[It] was a foolish decision on my part.”

Hodgkins, who spent about 15 minutes inside the Senate chamber, wearing a Donald Trump shirt and carrying a Trump flag, is the first of the Capitol rioters to be sentenced and convicted of a felony for participating in the attack, which led to 140 injuries and the deaths of five people.

Paul Allard Hodgkins has been sentenced to 8 months in prison in association with the riot at the U.S. Capitol. Hodgkins is the first person to be sentenced in a felony case in connection with the January 6 riot. pic.twitter.com/x5tnGrNa06

According to Hodgkins’ attorney Patrick Leduc, the event was a “protest that became a riot.”

“That was not, by any stretch of the imagination, a protest,” Judge Moss said in response. “It was …an assault on democracy. It left a stain that will remain on us…on the country for years to come.” If we allow people to storm the United States Capitol, what are we doing to preserve our democracy?”

Moss also suggested that Hodgkins’ sentencing could provide insight into the severity of the punishments for other Capitol rioters, as more than 500 people have been charged for participating in the attack. Some rioters have been charged, but not indicted, and some are being charged with larger crimes like conspiracy.

“Hodgkins was staking a claim on the floor of the United States Senate, not with the American flag but with a flag declaring his loyalty to a single individual over the entire nation,” Moss said.

Originally, the Justice Department requested a 1.5-year prison term, which prosecutors argued would help curb the motivation for a second attack, CNN reported. Last month, however, under a plea deal, the 38-year-old pleaded guilty to one count of obstructing an official proceeding, which carries a maximum penalty of 20 years and agreed to pay $2,000 in restitution to the Treasury Department.

In exchange, prosecutors decided to press less serious charges, including entering a restricted building and disorderly conduct. They also said they would request a reduced sentence for holding himself accountable and for saving the government from a costly trial.

Leduc contended that Hodgkins “lost his bearings” and made a poor decision which led him to being charged.

[This] “is the story of a man who for just one hour on one day lost his bearings…who made a fateful decision to follow the crowd,” he asserted.