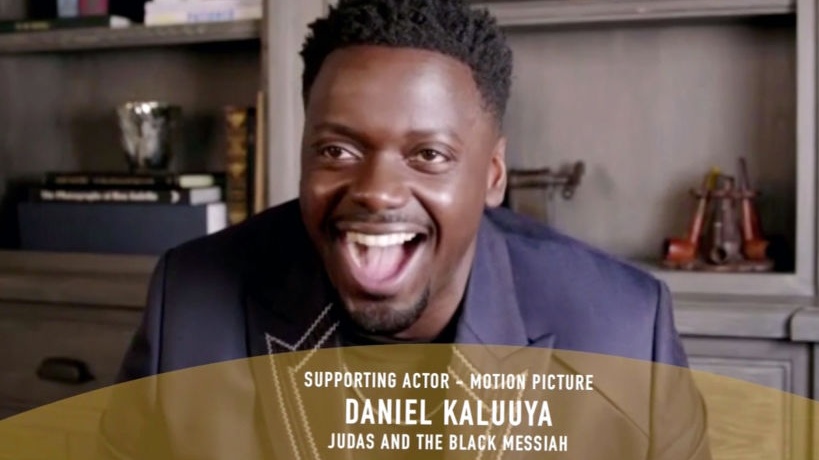 Daniel Kaluuya gave a stirring speech on Sunday after winning the Golden Globes award for best supporting actor, but not before he struggled with his microphone.

In a scene that was familiar to anyone who has been on a video call over the last year, Kaluuya’s microphone was off as he gave his acceptance speech following actress Laura Dern’s announcement that he had won for his role as Fred Hampton, the deputy chairman of the Black Panther Party, in the film Judas and the Black Messiah.

The camera quickly shifted back to Dern as Kaluuya soundlessly spoke and she nearly moved on before Kaluuya’s microphone began to work again and he could finally give the speech he meant to give.

“You’re doing me dirty. Am I on? Is this on? Can you hear me now?” Kaluuya joked before thanking the film’s director, cast and producers.

“It takes a village to raise a film. This took it out of me. I gave it everything. Like the great Nipsey Hussle says, ‘we’re here to give ’til we’re empty.’ And I gave it my everything. I couldn’t give it to a more noble man, and that’s Chairman Fred Hampton,” Kaluuya said.

“I hope generations after this can see how brilliant he thought, how brilliantly he spoke and how brilliantly he loved. He taught me about myself. Made me grow as a man and I appreciate that with all my heart. There’s a lot of information about how he died, but I hope people out there will grow and learn about how incredibly he lived,” he added.

The 32-year-old later joked about the microphone snafu in interviews with reporters.

He said he was just happy he was able to give his speech and honor those involved in the film as well as Hampton’s family members.

“That is the pandemic, bro… according to the WiFi. It was amazing. That’s what I wanted to speak because I want to give the recognition to where it’s supposed to be, to chairman Fred Hampton and the family. And then we did this, we did this to continue their legacies, that was the most important thing about it,” he said, according to People.

“So that’s why I was like, ‘Yay,’ I didn’t say you almost did me dirty. I was speaking and then I was just mad,” he added.

Kaluuya and his co-stars, Lakeith Stanfield and Dominique Fishback are receiving widespread praise for their work on the film, which centered on the FBI‘s efforts to infiltrate the Black Panther Party and ultimately assassinate Hampton while he slept.

Hampton’s son and wife were involved in the film, and although they did express some complaints about how the Black Panthers were portrayed, they have said in interviews with the Los Angeles Times that they are glad the film is being released and that Hampton is getting his due.

Kaluuya himself has referenced that, saying he hopes the film will make more people look into Hampton’s life.

“He’s been silenced, and been erased and been assassinated, physically and culturally. This is an opportunity to put him in his rightful position,” he told The Washington Post.