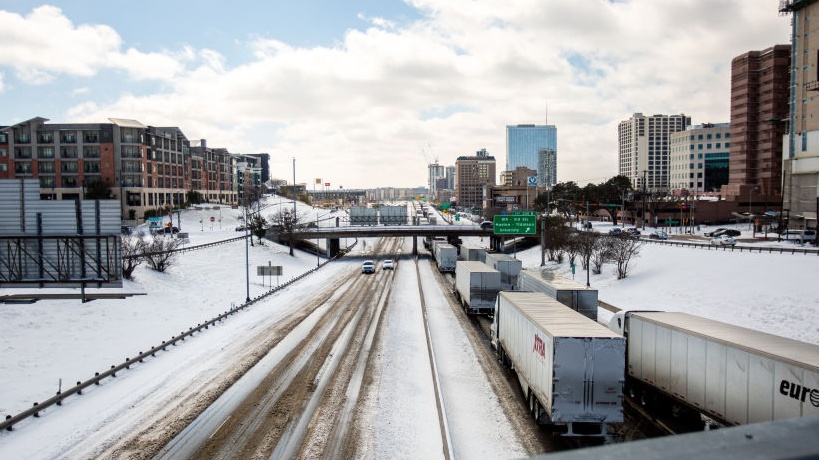 Austin, Texas delivery driver Chelsea Timmons was just about to complete her last grocery dropoff of the day last Sunday when she rode up an icy driveway during the unprecedented winter storm that hit much of the country this past week, Good Morning America reported, according to 6ABC.

There was just one problem, however, Timmons’ car was stuck. She called the couple, Nina Richardson and Doug Condon, to whom she was set to deliver the food, but even they couldn’t get her car to make the icy climb or safe reversal. After contacting AAA and receiving no assistance, it was then decided that Timmons would ride out the winter storm at the couple’s home.

The couple said Chelsea Timmons soon felt like part of the family, baking cakes in the kitchen and cuddling with their dogs. https://t.co/RK9OpdWpUV

“I’m so grateful for these two and grateful that they were not only able but very willing to just let a stranger into their home and keep me safe warm and fed and make me feel comfortable,” Timmons told GMA. “If my car was stuck in front of anybody else’s house, I don’t think that I would be in this situation.”

Richardson and Condon shared a steak dinner with Timmons on Valentine’s Day, their first night sheltering together. That’s when the three quickly became acquainted.

“When she first came in she was, I think, feeling a little uncomfortable being in a stranger’s house, but pretty quickly it kind of has moved into her just being part of the family,” Richardson said.

After expressing a dream of hers to one day open a bakery, Timmons found herself in the couple’s kitchen baking a gluten-free coconut cake.

“It was the least I could do to show my appreciation for their hospitality,” Timmons said.

As the storm worsened, it became clear that Timmons might need to shelter much longer than a night. She ended up staying for five days, according to CNN.

When the weather conditions finally allowed for a safe drive home, Timmons bid her new friends goodbye on Friday, although the three say they intend to keep in touch.

“We’ve had kind of an exciting week with crazy weather and a surprise guest, which turned out to be quite an enjoyable experience,” Condon told CNN. “We would hope that if our daughters were in a situation similar to Chelsea, that there would be someone that would treat them like we treated Chelsea. I don’t think we ever thought twice about it.”

The unusual winter storm left nearly the entire state of Texas without electricity and safe running water. Several storm-related deaths have been reported, although an official number has not yet been revealed. Sen. Ted Cruz (R-Texas) faced serious backlash for traveling to Cancun amid the devasting storm, as Blavity previously reported. Per Business Insider, U.S. Rep. Alexandria Ocasio-Cortez (D-N.Y.) volunteered at Houston food banks this past week and has raised at least $4 million to support relief efforts in the state.